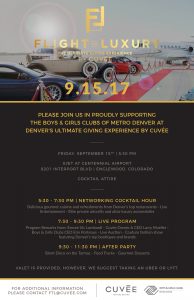 On Friday, September 15th, the 8th Annual Flight to Luxury will once again transform two of Denver’s private jet hangars at Centennial Airport into one of the city’s most prestigious charity events of the year. Produced by Cuvée, this red carpet hangar party will directly benefit Boys & Girls Clubs of Metro Denver.

Cuvée, a Denver-based, ultra-luxury travel company, has raised approximately $5 million for Boys & Girls Clubs since the event’s inception in 2009. This year, Cuvée’s goal is to raise $1.7 million at the event to support thousands of Denver youth who benefit from Boys & Girls Clubs programs. “We have an amazing opportunity at Cuvée to use our business, network and properties as a philanthropic platform,” said Larry Mueller, Founder and CEO of Cuvée. “There is nothing more that we care about than being able to give back to the community in which we live and love.”

Flight to Luxury will spotlight the most exquisite elements of luxurious travel – Cuvée’s couture villas in the world’s most sought-out destinations, private jets and high performance exotic automobiles by Cadillac of Denver and Sill-TerHar Motors. Add to that an incredible networking opportunity, a dynamic collection of live entertainment including a fashion show featuring local boutiques, delectable cuisine from the Mile High City’s top eateries and both live and silent auctions. 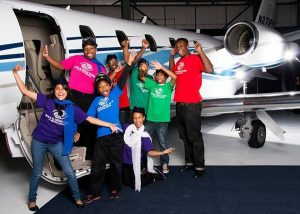 The event has featured local sports stars, celebrities and entrepreneurs, including Superbowl Champion Peyton Manning, and 2X Superbowl Champion, NFL Hall of Famer and Denver Broncos’ General Manager, John Elway; both of whom have worked closely with Cuvée’s founder, Larry Mueller, to promote the mission of Flight to Luxury.

A wide variety of tax-deductible corporate and individual partnerships are available. In addition, you may purchase individual tickets for $500 each. For press, sponsorship or VIP opportunities, please email [email protected] or call Whitney Skylar at 720-537-9886.