As South Korean Officials Fail to Allay Fears Over The Issues of Vote-rigging, Concerned Citizens and Activists Take to The Streets to Demand Answers 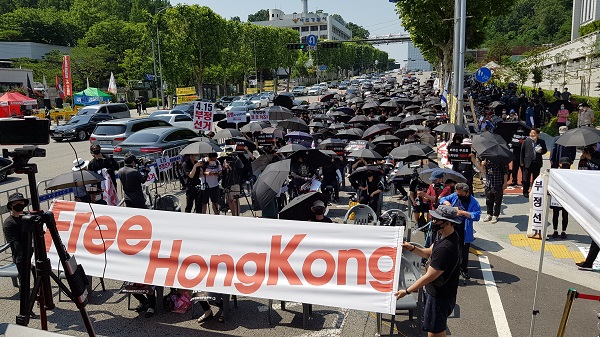 SEOUL, KOREA, June 18, 2020 /24-7PressRelease/ — It’s been more than two months since South Korea’s general election in April, but calls for a formal investigation concerning allegations of fraud in South Korea’s recent general election last April shows no signs of subsiding. In fact, beginning in late May, protests demanding answers concerning these allegations have been held in various cities across South Korea. The protesters, in a nod to the protests for democracy in Hong Kong, dress in black and often use black umbrellas as props in their protests.

The battle for truth behind the Democratic Party’s landslide victory has shifted from debates over statistical anomalies to evidence of physical tampering of voting materials and the voting machines used in the general election.

On May 16th, activists led by Young-man Han, a YouTuber, discovered near Namyangju, a city, various early voting materials along with seals used to cover ballot boxes to protect against tampering with the cast votes. These seals appeared to have been forcibly removed.

On May 28th the National Election Commission (NEC) invited the press to take part in the deconstruction of the voting machines to demonstrate that these machines and corresponding laptops linked to these machines were not equipped with features that allow external communication. However, the activists found NEC’s statements inconsistent as an official from the NEC also stated that it had to use software to disable Local Area Network (LAN) card features, which acts as a door to the network from the computer card features because the laptop providers were unable to remove these themselves.

In the face of growing concerns over alleged vote-rigging, the Blue House and both the main democratic and conservative parties have effectively chosen to ignore the citizens’ demands for a thorough review of the voting results. However, the concerned citizens and activists vow to continue the fight for what they consider to be a historic battle for South Korea’s democracy.

Gong Byeong-Ho Research Institute and Gong TV, established in 2001, is a research and educational institute that publishes commentaries on economic and political current events and provides lectures and written products on areas of self-management, self-improvement, science of success, science of leadership, and future prospects.

Georgia U.S. Senate Candidate Buckley says Other Candidates in the Race Who Have Not Stated Their Positions on the Major Issues Should Do So or Drop Out